Here are full rosters for the teams competing in Team Modern Super League, which starts on May 28 and runs for 13 weeks (with Modern Horizons kicking in starting in week 3).

The next Super League will be a Team Modern season, beginning a few weeks before Modern Horizons comes out and then extending through the summer.

There will be 8 teams and each show will feature one best-4-of-7 match. After 2 rounds of Swiss the 2-0 teams will get a bye into the Top 4 and the four 1-1 teams will play for the other two spots in the Top 4. Teams will submit 5 different decks for each show, and then we’ll set the schedule up such that all the decks and all the players take a turn before any can be repeated.

I am really excited about the mix of pros and content creators that we have lined up. This should also be a really fun time to explore Modern, and a really fun season!

P.S. Thank you Wizards of the Coast for both sponsoring and supporting this show.

After his team, Snapcardster, came up one match short in Season 8 Andreas was able to capture the title he so clearly coveted and prove himself to be the king of Vintage Super League Season 9. Congratulations also go out to Rachel Agnes, who finished second, as well as Rich Shay and Randy Buehler, who tied for 3rd. It was a great season all the way around, with good games up and down our playlist on YouTube.

Next up is probably a Team Modern Super League, hopefully starting in late May just before the launch of Modern Horizons. Then Vintage Super League Season 10 is likely to take place in the fall.

VSL Season 9 will start January 15. 16 individuals will be competing for the title includes a nice mix of Super League veterans and newcomers, and they run the gamut from Hall of Famers to Vintage specialists to content creators and everything in between.

Each player will play on two nights during the regular season and each night will feature a full round robin between 4 players (aka, everyone plays each of the other 3 players). Anyone who manages a perfect 6-0 during the regular season advances straight to the final show of the season. 5-1 earns a spot in the semifinals while 4-2 earns a berth in the first round of the playoffs. The exact format of the playoffs will vary depending on the number of players who wind up at each record.

Without any further ado, here is the cast for season 9:

All our shows will be on twitch.tv/Magic on Tuesday nights starting at 6pm pacific time, and they will appear on the Wizards YouTube channel 24 hours later. Hopefully we’ll see you there.

This should be fun!

Team Standard Super League runs on Tuesday nights starting at 6pm pacific time (not 5) from May 15 through July 10. It will be a shorter season than previous team formats as we’re doing a single elimination bracket this time around. We’re also going to mix up the structure of the matches a bit so that we get to watch all the players and (probably) all the decks too.

Here are the details:

And now for the fun part – check out this amazing slate of teams!

Team Standard Super League is fully sponsored by Wizards of the Coast. They provide the prizes, access to special “4-of” Magic Online accounts for players to use, and in addition they provide financial compensation to the production staff.

Team Vintage Super League starts on Thursday (yes, Thursday) April 19th at 6pm pacific time. The show will follow the same format as the very successful Team Modern season: 8 teams submitting 6 different decks, banning one, and then playing best 4 out of 7 Conqueror style (aka, the winner of any given match keeps playing). We will use the same structure as well: 2 rounds of Swiss with the two 2-0’s getting byes into the Top 4 and the four 1-1’s playing for the other two spots. 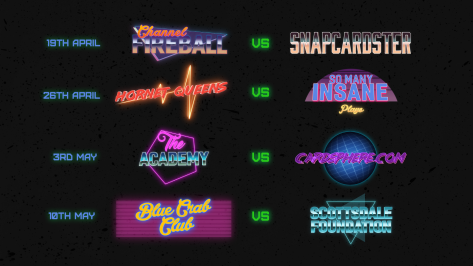 Here is the slate of teams that will be competing:

This season should be awesome! See you on Thursday nights (or on YouTube)!

Note: Prize support (but not production support/costs) is provided by Wizards of the Coast. Visit https://www.patreon.com/SuperLeague if you want to help fund this and future shows.

Shows begin February 6th in our usual time slot (Tuesday nights at 5pm pacific time on twitch.tv/Magic). Each night will feature 2 of our 8 teams bringing 6 different Modern decks to the table and playing best 4 out of 7 using the “Conqueror” format. You can read all the details about the format and teams here.

In addition, all 12 players have agreed not to submit the same deck twice (during the regular season, anyway). We’re looking forward to some quite spicy brewing as we explore the new meta created by the recent changes to the B&R list!

You can support the show on Patreon.

You can check out full team rosters and standings HERE.

The schedule and results for each week will be updated HERE.

Shows will broadcast live on twitch.tv/Magic on Tuesdays at 5pm pt (unless Rietzl’s team is involved, in which case we’ll start an hour later).

The VODs will be exclusive to Twitch for 24 hours, and can be seen HERE. On Wednesday nights I will add them to the YouTube playlist HERE. 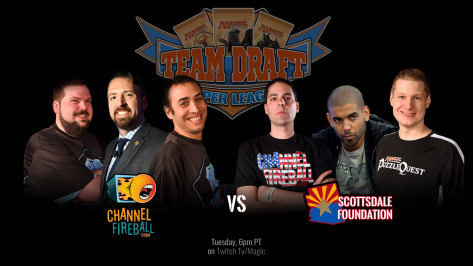 Watch us on Twitch!

Live shows are 5pm pacific time every Tuesday on twitch.tv/magic.

You can watch season 2 here.

You can watch season 1 matches here.

All decklists for season 2 can be seen here.

Decklists for season 1 are here.