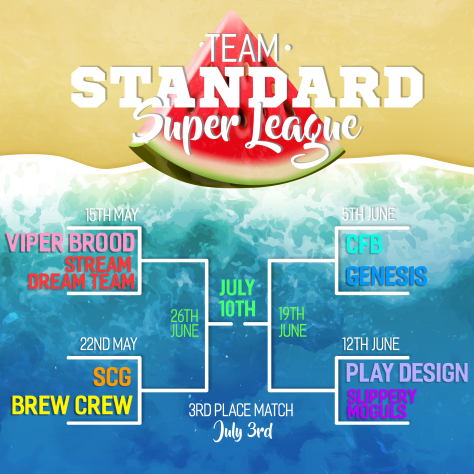 Team Standard Super League runs on Tuesday nights starting at 6pm pacific time (not 5) from May 15 through July 10. It will be a shorter season than previous team formats as we’re doing a single elimination bracket this time around. We’re also going to mix up the structure of the matches a bit so that we get to watch all the players and (probably) all the decks too.

Here are the details:

And now for the fun part – check out this amazing slate of teams!

Team Standard Super League is fully sponsored by Wizards of the Coast. They provide the prizes, access to special “4-of” Magic Online accounts for players to use, and in addition they provide financial compensation to the production staff.

Watch us on Twitch!

Live shows are 5pm pacific time every Tuesday on twitch.tv/magic.

You can watch season 2 here.

You can watch season 1 matches here.

All decklists for season 2 can be seen here.

Decklists for season 1 are here.